At the beginning of this year, Achatinella apexfulva, a species of Oahu tree snail, went extinct. This is not the first and unfortunately, it will not be the last.

This species has likely been gone from native habitats since before 2004. When something is no longer found in the wild like this, it’s called functionally extinct.

At one point, there were 41 species of Oahu tree snails, but now it’s thought 6 to 7 remain.

In this painting, I’m showing the shells of multiple species of Oahu tree snail. The largest one in the center is of A. apexfulva and was modeled after Lonesome George, who was the last individual of this species.

Let’s move on to why this extinction matters and why snails are so interesting.

Snails are part of the taxonomic class gastropoda. This class includes snails and slugs.

The study of gastropods is called malacology.

There is so much diversity in the types of habitats that this class of organism is found in. They can be on land or in freshwater or saltwater. This class is one of the few to succeed in all 3 of these major habitats.

The more common gastropods are your garden variety snails and slugs, but the more hardcore species live in hydrothermal vents found in the ocean. The diversity of gastropoda is second only to insects. In terms of their diversity around the world, it’s estimated that over 60,000 species exist.

In Hawaii there was once over 750 species of terrestrial snail. Due to habitat destruction and invasive species, 90% of that snail diversity has been lost.

The primary difference between a snail and a slug is the shell. If you can see a shell, it’s a snail. Slugs can have internal shells, but they do not have visible external ones.

Shells are primarily made out of calcium carbonate and are grown from the bottom up, so the newest part of the shell is where it’s touches the snail.

There is some variation in how the shells look. For example, with the A. apexfulva specimens, the shell can be a lot darker than the one I’ve depicted in my painting.

Baby snails, also called a keiki, are born with shells. At this stage, they’re called a protoconch. The shells grow throughout the snails life and the protoconch ends up at the very top of the shell.

Shells provide protection for the snail because they can completely retract into them.

Inside is where you will find the snails organs, including one that is solely dedicated to the task of growing their shell.

Now you might be wondering how slugs get by without having shells. They look like they’re just as soft and squishy as snails so how did they evolve to not have that protection. One possible reason is because shells slow you down. At some point in their evolutionary history they either did not have the pressure to evolve shells or there was some sort of evolutionary pressure to be speedier. There’s a trade-off for most things, shells included.

The diets of gastropods is as diverse as they are. There are herbivores, carnivores, scavengers, even internal parasites. O’ahu tree snails specifically, though, are herbivores that eat fungus off leaves. They spend the majority of their life in one tree, helping it maintain a balance with the fungus that grows on it.

These snails are rarely found on tree species that are not native. This is one reason why they are so threatened. The original forest of Oahu has greatly declined, as much as 85% by some estimates. In some areas, native species of trees been replaced by non-native species.

I mentioned that some snails are carnivores. One such species is involved in the decline of the Oahu tree snail and almost a poster child for the dangers of bio-control.

This species is Euglandina rosea or the rosy wolfsnail. Originally from the south-eastern united states, this snail was introduced to hawaii in the mid-1950s to try and control another type of invasive snail from Africa. This tactic did not work because the rosy wolfsnail preyed upon the native snails instead because they were smaller and much easier pickings.

There is currently a major effort going on to try and save these snails and other invertebrates in Hawaii. The Snail Extinction Prevention Program run by the state of Hawaii, raises snails in a lab setting to try and protect the ones that remain.

Programs like this require ongoing funding, so one thing we can do to help is vote for politicians who prioritize conservation. 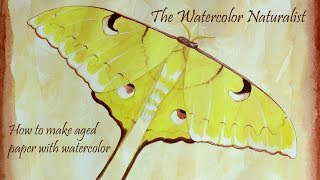 How to make your paper look aged with watercolor

How to make your paper look aged with watercolor